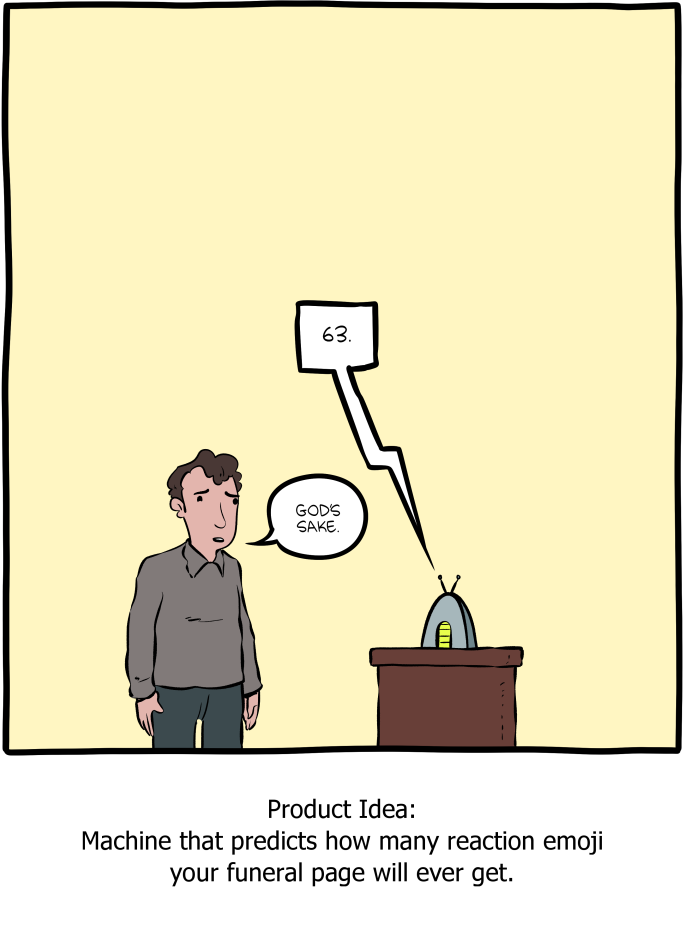 Hovertext:
Unfortunately, it turns out many of them are just corporate accounts looking to self grief-related products.

Shortly after the Preston Innovation Lab was set up at Rice University, graduate student Faye Yap was rearranging a few things when she noticed a dead curled-up spider in the hallway. Curious about why spiders curl up when they die, she did a quick search to find the answer. And that answer—essentially, internal hydraulics—led to delightfully morbid inspiration: Why not use the bodies of dead spiders as tiny air-powered grippers for picking up and maneuvering tiny electronic parts?

Yap and her colleagues—including adviser Daniel Preston—did just that. They transformed a dead wolf spider into a gripping tool with just a single assembly step—essentially launching a novel new research area they have cheekily dubbed "necrobotics." They outlined the process in detail in a new paper published in the journal Advanced Science. The authors suggest the gripper could be ideal for delicate "pick-and-place" repetitive tasks and could possibly be used one day in the assembly of microelectronics.

Preston's lab specializes in so-called soft robotics, which eschews the usual hard plastics, metals, and electronics in favor of more nontraditional materials. Hydrogels and elastomers, for example, can serve as actuators powered by chemical reactions, pneumatics, or even light. Roboticists have also long found inspiration for their designs in nature, studying the locomotion of such animals as cheetahs, snakes, insects, starfish, jellyfish, and octopuses. (See, for example, our story on the development of the OctaGlove, designed to grip slippery objects underwater.)

teh_g
reply
This is a case where science has gone too far.
Roseville, CA

Be sure to watch the skies on the last morning of May, for a possible Tau Herculid meteor outburst.

The story starts with the discovery of periodic Comet 73P/Schwassmann-Wachmann 3 back in 1930 from the Hamburg Observatory. (We’ll be referring to it as simply ‘Comet 73P’ from here on out). Astronomers Arthur Wachmann and Carl Schwassmann caught this fuzzball comet on glass plate captures as a +9.5 magnitude object, moving through the constellation Hercules.

But it was the orbit of Comet 73P that gave observers pause: going around the Sun as a short period comet once every 5.4 years with an orbit inclined just over 11 degrees relative to the ecliptic plane, there was a good chance the comet would be a splendid object on its May 31st 1930 passage 0.062 Astronomical Units (AU) (9.2 million km) from the Earth.

But such was not to be, as Comet 73P was a decided under-performer during the 1930 apparition, only topping out at +7th magnitude and never really breaking naked eye visibility. Curiously, astronomer George Van Biesbroeck noted that the comet appeared ‘spindle-shaped’ as seen through the giant 40-inch refractor at Yerkes Observatory—perhaps the first time humans had set eyes on the 1.3 km nucleus of a comet.

After Comet 73P receded from view, not much more was seen of the comet until 1995, when it increased dramatically in brightness. This 400-fold increase was all the more dramatic, as the comet was actually over 1.3 AU from the Earth at the time.

Observations from the European Southern Observatory caught four separate fragments for what was once Comet 73P; later observations by Hubble and the late infrared Spitzer Space Telescope in 2006 added dozens more.

When comets travel close to the Sun, they lay down debris streams of dust shed during their inner solar system passage. If a planet happens to be in the way (such as the Earth) a meteor shower occurs, witnessed as silent flitting streaks through the sky. The Perseid and Geminid meteors are two great annual showers, originating from comet 109P/Swift-Tuttle and ‘rock-comet’ 3200 Phaethon, respectively.

Now, debris streams evolve over time, as the complex tug of the Sun and planets pull them into and out of the Earth’s path. The Andromedids, for example, where once a great storm in the late 19th century, which has since fallen into obscurity.

Fast-forward to 2022, and models show that things could get interesting later this month. Comet 73P lays down a stream known as the Tau Herculid meteors. The shower takes its name from its 1930 radiant position near the +3.9 magnitude star Tau Herculis, though in modern times, the radiant has drifted into the adjacent constellation of Boötes the Herdsman.

On most years, the Tau Herculids aren’t much to look at. In 2022 however, things could get interesting as Earth is due to cross a couple key streams laid down by Comet 73P. Specifically, astronomer Jérémie Vaubaillon working at the Institute for Celestial Mechanics and Computation of Ephemerides in Paris shows an encounter with streams from 1892 and 1897 laid down pre-discovery. Now, just how dense these streams are is anyone’s guess. Another pair of studies, however, one by a Japanese team led by astronomer Shun Horii and another German team led by astronomer Hartwig Lüthen both reached the same conclusion: that the Earth will run headlong into the 1995 fragmentation stream this year.

A May Meteor Storm in the Making?

The key date and time to watch for a possible 2022 Herculid outburst is on the morning of Tuesday, May 31st at around 5:00 Universal Time or 1:00 AM Eastern Time EDT. This places the radiant high in the sky for Northern Hemisphere observers in the pre-dawn hours, another plus. The Moon is also well out of the way, reaching New just the day prior on May 30th.

The Tau Herculids are a ‘slow shower’ with an inbound velocity of 16 km/second—slow that is, compared to, say the November Leonids, with a swift 72 km/second incoming velocity. Expect any Tau Herculids you see to be slow and stately emanating from a radiant near the globular cluster Messier 3, about a third the way between the bright star Arcturus and the end of the handle of the Big Dipper asterism.

Believe me, a meteor outburst approaching a thousand meteors per hour is an unforgettable sight; we once witnessed just such a Leonid storm from the dark deserts of Kuwait in 1998. Of course, the 2022 Tau Herculids could dazzle or fizzle… but do you really want to take the chance on missing out? Set your alarm on the morning of May 31st (or stay up late) if skies are clear… you just never know what you might see.

The post We May See a Tau Herculid Meteor Outburst on May 31st appeared first on Universe Today. This hit too close to home.
Roseville, CA

Privacy-tools-seller Windscribe said it failed to encrypt company VPN servers that were recently confiscated by authorities in Ukraine, a lapse that made it possible for the authorities to impersonate Windscribe servers and capture and decrypt traffic passing through them.

The Ontario, Canada-based company said earlier this month that two servers hosted in Ukraine were seized as part of an investigation into activity that had occurred a year earlier. The servers, which ran the OpenVPN virtual private network software, were also configured to use a setting that was deprecated in 2018 after security research revealed vulnerabilities that could allow adversaries to decrypt data.

“On the disk of those two servers was an OpenVPN server certificate and its private key,” a Windscribe representative wrote in the July 8 post. “Although we have encrypted servers in high-sensitivity regions, the servers in question were running a legacy stack and were not encrypted. We are currently enacting our plan to address this.”

Things are not looking good for Emergent BioSolutions, the contract manufacturer that ruined 15 million doses of Johnson & Johnson’s one-shot COVID-19 vaccine and millions more doses of AstraZeneca’s COVID-19 vaccine at its production facility in Baltimore.

The Food and Drug Administration on Wednesday released a searing inspection report of the facility, finding a slew of significant violations and failings.

Meanwhile, federal lawmakers have opened a multi-pronged investigation into whether Emergent used ties to the Trump administration to get billions of dollars in federal contracts despite a history of failing to complete contracts, inadequately training staff, persistent quality-control issues, and an “unjustified” 800% price increase for an anthrax vaccine.

teh_g
reply
I hope these guys didn't ruin doses that made it into people's arms.
Roseville, CA